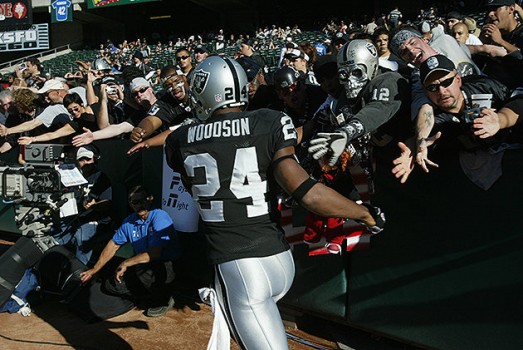 Woodson returns to the Raiders: Gear up the Hate Train

Let’s take a look at some of the hate, shall we?

From Evan Silva, everyone’s favorite hater of everything, of Rotoworld: “He’s chosen the Raiders over the Broncos despite the fact that Denver is on the cusp of the Super Bowl, and Oakland is one of the worst teams in the league. However Woodson spins it, money was almost certainly the determining factor.”

And when it turned out a few hours later that the Raiders in fact only offered Woodson $600,000 more than the Broncos (I use the world ‘Only’ because Woodson has made millions), here is what Silva had to say: “Unless the Broncos’ base offer was dramatically lower, it’s definitely surprising Woodson chose the cellar-dwelling Raiders over Denver based on a theoretical extra $600,000. Money talks.”

Saying that Woodson chose the Raiders over the Broncos for just a wee bit more money is ridiculous.

Another nice internet blogger who hates on everything is the guy over at Walterfootball (I’m guessing his name is Walt). Here’s what he had to say about the signing: “I don’t really understand this signing for either side in terms of a pure football perspective. The Raiders have one of the least-talented rosters in recent memory. Sure, Woodson is an upgrade over what they already have (Usama Young), but when it comes down to it, his presence will do one of two things: 1) Make Oakland win enough games to take the franchise out of contention for Teddy Bridgewater and some of the other top quarterbacks, yet still keep them out of the playoffs. 2) Have no impact because he’ll be 37 soon, meaning it’ll just be a waste of money.

For Woodson, the best scenario for him would have been to go to a Super Bowl contender like the Broncos or 49ers to give him a chance for another Super Bowl ring. By signing with Oakland, it shows that Woodson’s No. 1 priority is money. Free agents who chase big contracts almost never pan out. It’s very fair to question whether Woodson’s heart is still in the game.”

Hate hate hate hate hate. So Walt’s theory is that it is bad for the Raiders to sign Woodson because doing so will make them win more games (which is, you know, kind of the POINT OF PLAYING PROFESSIONAL SPORTS) and take them out of contention for a QB who may–or may not be–the number one pick a year from now. Sound. Logic. That’d be like saying the Chiefs should’ve tanked last year to put them in a position to draft Matt Barkley–who at the time was considered a number one pick and we all know how that turned out.

The Denver Post, naturally, was not on board with the decision either: “If money, not winning the Super Bowl, was clearly Charles Woodson’s top priority, why would the Broncos want him anyway?  ‘There’s no freaking way he’d want to go to Oakland,’ Broncos corner Champ Bailey told 102.3 FM ESPN on Tuesday. It is hard to believe, Champ, but once again the almighty dollar prevailed.”

Peter King got in on the action as well: “I guess personal history mattered to Woodson. Maybe his wine business. But unless Denver made a horse dung offer, it’s a strange decision.”

Or how about, it’s a perfectly normal decision. A guy with one more season left in his career wanted to finish it out with the team that brought him into the league. Isn’t that how it should be? 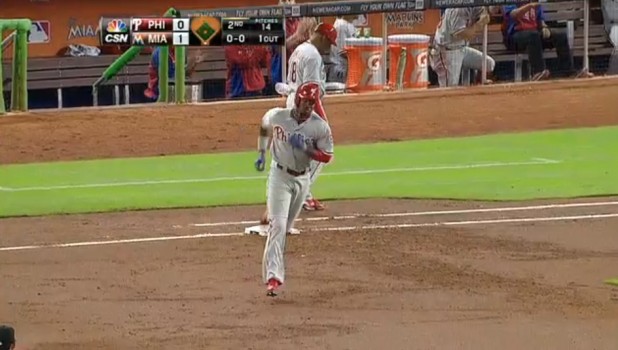 Welp, We’re Back Where We Started

Just a day after the miraculous 9th-inning rally over the Reds and elite closer Aroldis Chapman, the Phillies fell to the Marlins 5-1 and put up another poor offensive start. The rare highlight of the evening was Domonic Brown’s solo shot and stolen base.

Rumor has it that the almost untouchable Chapman blew yesterday’s save because he ate too many pastries… according to Phillies’ español broadcaster Rickie Ricardo. Apparently, Mr. Ricardo had ordered a box of 100 cream cheese and guava pastries and presented them as a gift to Chapman. He ate 18 and then blew the save. If that’s our key to victory, then Chollie needs to be hitting up Tastykake on a daily basis (for more than just his usual chocolate Kreamies fix.)

Cole Hamels pitched another decent game, in most respects, but fell to 1-7 on the year. Hamels left in the 7th with a 1-run deficit, and the combination of DeFractus/Aumont helped pad the lead for the Marlins.

Story has it that Cole Hamels hasn’t pitched with a lead since April 7th. Yeesh. It really seems like every time we get some momentum, it’s spoiled with some absolutely depressing, humbling, pathetic loss to a lower caliber team. Cheers to that. 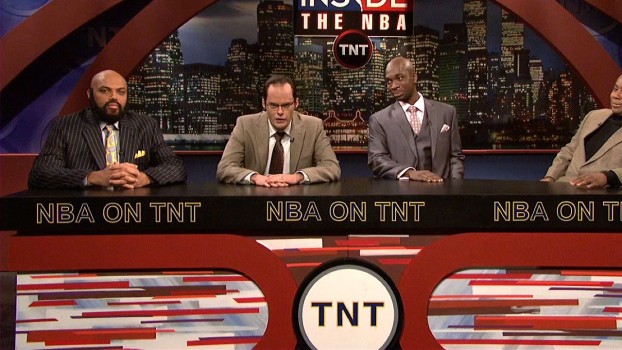 Reflecting On NBA On TNT

I just wanted to take a moment to talk about the NBA broadcast on TNT. It’s the playoffs, so I feel it’s appropriate to assess and discuss the sort of program TNT is presenting during these primetime moments.

The crew, which includes Ernie Johnson, Shaquille O’Neal, Charles Barkley, and Kenny “The Jet” Smith, provide coverage and analysis throughout the game, which is about as incoherent as television could get.

Honestly, it’s probably the most entertaining sports coverage on television today, but make no mistake, sports are rarely covered. Most of the programming involves 4 middle-aged men incoherently babbling and insulting each other for sometimes 20 minutes straight. It’s a lot of chuckling, a lot of shameless promotion, and a whole lot of confusion.

Seriously, the producers must be biting their fingernails during every broadcast.

The Knicks and Pacers Game 5 highlights went something along the lines of (and I’m paraphrasing… terribly…):

Ernie Johnson : And the Knicks lead by 2 at halftime…. Kenny your thoughts?

Kenny The Jet : The Knicks look alright. It really just comes down to the effort of your players and- 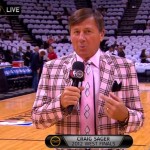 Charles Barkley : Aye, lemme tell you something… if Melo come out on fire like he’s s’posed to be doing, they gon’ be alright…. (immediate transition of subjects) Craig Sager suit look like the damn emergency broadcast system done went offffff.

Shaq : I like that suit. He dressed sharp. (Then Shaq makes a poor joke to emulate Charles Barkley, no one laughs, there’s an awkward silence, and Ernie chimes back in to move the segment along)

Then that process is repeated for about 30 minutes before, during, and after the game. It’s high comedy. Please, allow me to demonstrate: 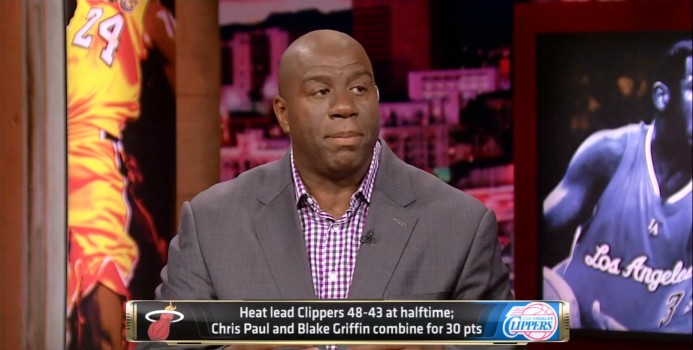 Reason #103 Why Magic Johnson Is A Terrible Analyst and Coach

Amidst the Knicks’ playoff woes lies J.R. Smith’s terrible shooting percentage. Mike Woodson, the Knicks coach, remains stubborn in his efforts to start J.R. Smith and have him break his shooting slump. Woodson still gives J.R. Smith a majority of the minutes in spite of their 3-1 deficit in the series, and also in spite of sitting shooters with more reliable and consistent numbers like Novak being available.

The Knicks have very little chance of winning this series, but ideas like this are why they are absolutely doomed:

Knicks fans Coach Woodson should start JR Smith next game to see if he can break out of his shooting slump. #NBAPlayoffs

Magic… you a dummy. 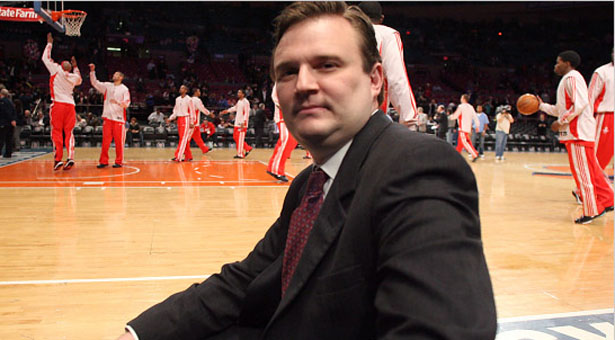 The 76ers have hired this guy, Sam Hinkie, as the new President and General Manager of Sixers’ operations. Hinkie is a welcomed outsider that replaces Tony DiLeo for overseeing a majority of the decisions on behalf of the 76ers going forward. He has spent the last 6 years in the Houston Rockets organization, going from Vice President of Basketball Operations to Executive Vice President in 2010.

This is a great move for restoring some certainty in the Sixers future. Hinkie has been a well-sought after executive and is tagged as being one of the pioneers of “analytics” in basketball. This, is being compared to the movie ‘Moneyball’ for basketball, where cap-space and efficiency percentages are taken into consideration with much more regard than say, individual points-per-game.

An interesting example of that is this year’s 2012-13 Houston Rockets team, which intentionally stacked their roster to make 3-point attempts, so that even if only a 3rd of them were made, the opposing team would have to make at least 50% of their field goal attempts to break even. That was something Hinkie was responsible for engineering, and in the case of the Houston Rockets, it worked.

The point is, Hinkie is much better at restructuring a team from the inside-out. Someone of his notoriety allows for better coaching prospects, as well. The turn-around time for success under a system like that is much quicker and bodes well for cultivating draft picks and salary space.

With all the speculation about whom the 76ers will hire as head coach, they have not actively interviewed anyone yet. Tony DiLeo intends on resigning publicly this week, and I imagine the interview process will carry on from there. 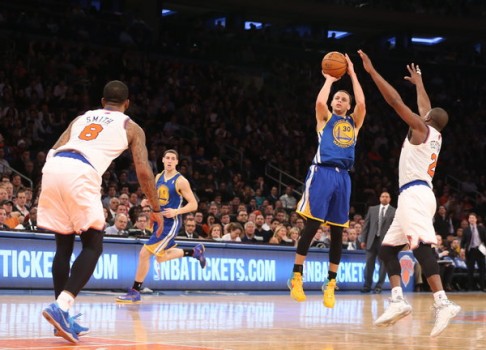 It turns out that even when we don’t try to Jinx the Phillies, we end up Jinxing them. So….maybe we should just stop mentioning them and jinxes altogether?

I was glad to see that my Miami Heat prediction turned out to be correct, however, the free throws…not so much. Man, that was a beat down of the highest order.

Predictions for tonight?  Gotta go with the Grizzlies and the Pacers. Both home. Both more complete teams.

Also, check out this tweet from MettaWorldPeace commenting on last night’s Warriors game: “I think Steve Curry is Top 10 in the NBA. If he works on his defense, he will be MVP next year.”

Gotta love the response from Steph (aka Steve) Curry’s response as well: “Back to Oakland. Ready to get back to work already. Steve Curry…out!”