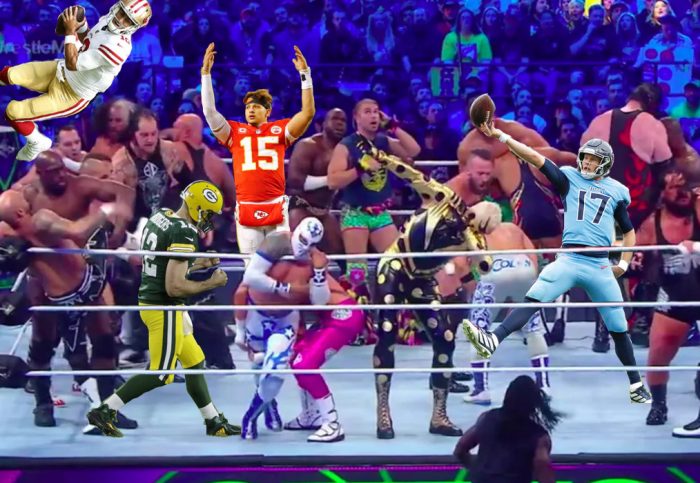 Last week was tough picks-wise as I went 0-2 against the spread leaving me at 1-3 for this post season which is…not ideal. Those who bet Seattle got an extremely bad beat as they lost by 5 (with a 4 or 4.5 point spread) and would have covered if not for a failed two-point conversion attempt. Not to be out-done, those who bet Houston were probably putting a down-payment on their new beach house by the end of the first quarter only to be auctioning off that same house by the end of the game. What a crazy collapse. But what the hell, you knew all of that information already, no? Let’s look ahead to the final multiple-game weekend of football this year!

Great game by Mahomes last week to remind us all that he, and not in fact, Lamar Jackson, is currently the best QB in football. All signs are pointing to KC steamrolling over the Titans but you know what, I don’t believe in signs!  What I do believe in is Derrick Henry steamrolling fools into oblivion. That’s why I’m going with the Titans to not only cover but to defeat the Chiefs and represent the AFC in the Super Bowl.

If you’re a Cowboys fan, it’s gotta be reassuring that the year after Green Bay fired Mike McCarthy–newly hired head coach of the Cowboys–that the Packers look rejuvenated and like world-beaters and like the ONLY problem they had was that Mike McCarthy was in charge. Wait, is reassuring the right word?

Anyway, this should be a great game. Good defenses, great rushing games, hunky quarterbacks, hunkier COACHES, what more could you ask for? I’m going with the niners.

Can we take a moment to talk about Antonio Brown and his untimely demise?  Yeeeeeeesh.  If you haven’t seen the video of him yelling at the cops, his baby mama, and indirectly at his children… it’s tough to stomach.  The guy is literally spiraling right in front of our eyes.  Not for the faint of hearts.

Checking in on Antonio Brown…. pic.twitter.com/2QpX7w7VCk

I only wanted to post that because I drafted him in the second round of my money league.  F that guy.  On to the picks!

If you would have told me last week in the 2nd quarter down 24-0 that the Chiefs would still cover… I would have said “You’re right! Because I picked them to cover and I’m all knowing!”  But even a blind squirrel finds a nut from time to time.  Not considering the first quarter, that game was all Kansas City.  They just have too many weapons.

I expect more of the same this week.  In spite of the criticism, I’m a believer in Kansas City’s defense.  They won’t contain Derrick Henry (newsflash: no one can), but it still takes longer to put up points with a consistent running game versus a passing game that has the potential to score on every play.  The Chiefs are just going to outscore them, much like the Texans, and maybe have a decent defensive play here and there.

This almost feels like a trap.  I get that the 49ers defense is next-level, but a nearly 8-point spread for Aaron Rodgers and the Green Bay Packers?  Am I missing something?

Everyone knows that State Farm is already pulling strings behind the scenes to have the Discount Double Check ShitBowl 2020 featuring their two highly-paid spokespersons.  What a corporate dream that would be, right?

Still… this feels like such a trap pick.  My first instinct is to believe that Aaron Rodgers is capable of winning this game for the Packers or at least keeping it manageable.  Seven and a half seems like a very favorable spread in what would likely be a close, exciting, late evening prime-time game.  You know Joe Buck and Troy Aikman don’t call blowouts — it’s in there contract.

So by that notion, I’ll fall for the trap.  I’m taking the Packers with the spread.