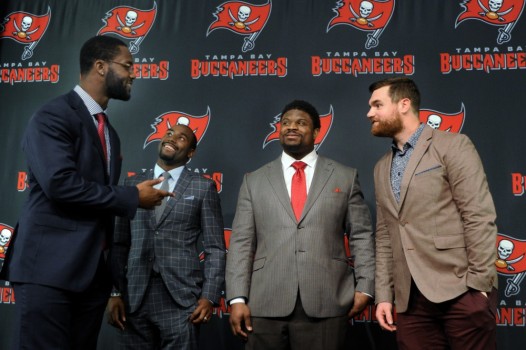 Win Free Agency in the NFL and you Lose

Watching the Tampa Bay Buccaneers get absolutely shellacked by the Falcons on Thursday reminded me that back in March, I couldn’t escape articles talking about the revamped Bucs roster and how they were the undisputed ‘Winners’ of Free Agency.

From Yahoo: “It’s hard not to like a talented Bucs team getting more talented with some nice additions, namely Alterraun Verner, Michael Johnson, Anthony Collins, Clinton McDonald and Evan Dietrich-Smith. Can’t say too many teams have done more. They can win 10 or 11 games under Lovie Smith and be this year’s Kansas City Chiefs.”

From NFL.com: “Lovie Smith’s influence should be like a warm spring thaw after the Tampa Bay Buccaneers’ wintery 2013 season. The Bucs revamped an already solid roster without losing many pieces. The signing of Alterraun Verner more than made up for cutting Darelle Revis. Verner came much cheaper and is a better fit in Smith’s system. Adding Michael Johnson to the defense gives Gerald McCoy a Bash Brother to hunt quarterbacks with. Scrapping the offensive line for upgrades at every spot was a stroke of genius. If Josh McCown can recapture his 2013 magic, the Bucs could surge to the top of the NFC South.”

From Profootball Focus: “The Bucs already had a lot of talent on the roster, but they have filled a lot of holes before the draft rolls around with some impressive moves.”

Sports Illustrated had more of the same, with the declaration at the top of the article that predicting free agency winners is like handing out NFL Draft Grades in that both sets of reactions usually turn out to be at least 50 percent wrong. So….why do them?

Who knows. But one thing is for sure: The Bucs suck. They are 0-3 and have been blown out by the Falcons and defeated by two backup quarterbacks: Derek Anderson and Austin Davis (WHO?).

They are “competing” with the Jags and the Raiders and possibly the Giants for the first overall pick in next year’s draft.

Which is a shame because they spent $121.5 million in free agency, the biggest contract being $43.75 million to Michael Johnson who is currently injured.

So yeah. Out of all those awful teams, I feel the worst for the Bucs. They spent so much money and brought in a new coach so they are going to be stuck with these pricey, bad players and coach for another season. At least the Jags and Raiders can cut bait with their coaches after this season (if not before).

Anyway, enough depressing Bucs, Jags and Raiders talk. Let’s get to the picks!

Chiefs +4.5 (I think the Chiefs get their first win this week)