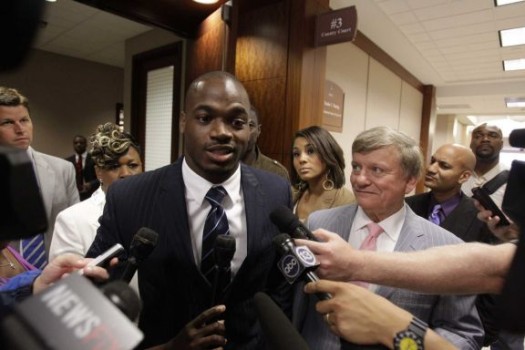 Jeebus, what a terrible week. The whole Ray Rice fiasco now Adrian Peterson is an accused beater of children.

The weird part about the Adrian Peterson story is that it prompted about a billion, “If hitting your kid with a switch is illegal, then my mom would be in prison!” har har har jokes on Twitter, which is…interesting.

For one thing, everyone making that joke needs to realize, their mom is not Adrian F-ing Peterson. Peterson is chiseled, and wrecks grown men for a living, just imagine what he would do to a FOUR YEAR OLD CHILD with a switch. Actually, you don’t have to imagine because the pictures are all over the internet, and please bear in mind, those pictures are a week old.

For my bachelor party, I got shot like 35 times during a Bachelor run with 20 some paint ball guns. That hurt like hell and I threw the biggest (debatable) tantrum of my life afterwards, but even those welts were mostly gone after a week. The Vikings made the right call deactiviating him for this game.

According to police reports, the child, however, had a slightly different story, telling authorities that “Daddy Peterson hit me on my face.” The child also expressed worry that Peterson would punch him in the face if the child reported the incident to authorities. He also said that he had been hit by a belt and that “there are a lot of belts in Daddy’s closet.” He added that Peterson put leaves in his mouth when he was being hit with the switch while his pants were down. The child told his mother that Peterson “likes belts and switches” and “has a whooping room.”

Here are my 3 team teaser picks with the lines from Delaware Park: