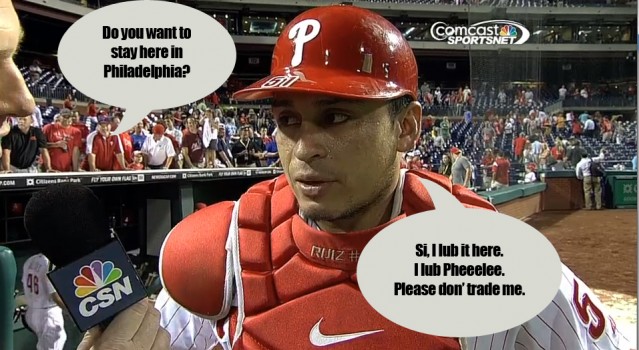 Chooch Doesn’t Want to be Traded

Today is the trade deadline. Discussions have been relatively quiet, but it always seems that way up until the last frantic minute.

Michael Young has openly come out and said he will waive his trade clause for the Rangers or Red Sox. I’m sure they are dying to have a guy who has half as many GIDP as he does RBI.

With Yadier Molina going down last night, there’s been a lot of rumors about our beloved Carlos Ruiz getting traded. I, for one, do not want that to happen.

The pitchers absolutely love him, he’s one of the best defensive catchers in the league, and what is he going to do when Molina comes off of the DL? Split duties?

Can we just take a second here and appreciate how good of an organization the St. Louis Cardinals have been recently? In the past 15 years, they have had only 3 losing seasons, been to the playoffs 9 times, and won 2 world series.

How do they do it?  I don’t know, but the Phillies better find out. In the immortal word’s of Cardinal Pretzley: Ruben…take notes.

You know what happens when you don’t have cable? You get stuck watching shows like: Under the Dome. You know what the best part about Under the Dome is? A freaking DOME came down and surrounded this town and all the citizens reacted the same way: they took a look at it, sighed, shrugged and went “Meh.”

Are you kidding me? If a Dome came down around Newark, I’d be running around like “OMG WE’RE ALL GONNA DIE! I NEED FOOD AND BATTERIES AND GUNS AND BLANKETS AND FIRE AND WATER AND AAHHHHHHHH GET ME OUTTA HERE!”

But not the citizens of Chester’s Mill. Nope. They’re just like, ‘Whatever.’

So, have you seen the Supercuts commercial with that band who are incredibly in love with Supercuts, saying things like, “You have a pride in the way you step out into public, especially when you have a good haircut.”

Well, did you know that the band featured in the commercial is an ACTUAL band? How weird is that? I thought they were just a bunch of actors. But no. They’re a real band. They’re called ‘Vintage Trouble’ and they played at the ESPYS.

Look, I know that as a band you gotta do what you gotta do, but to do a freaking Supercuts commercial?

Although, to be fair, I probably never would’ve heard of them and they probably wouldn’t have gotten the ESPYs without it, so I guess there was a method to the madness. Be sure to keep an eye out for the tiny Nicorette ‘Celebration Band’ at next year’s award show.

Speaking of bands, did you know there was a guitarist who got kicked out of Nirvana AND Soundgarden before they both got super huge?  Yeesh. 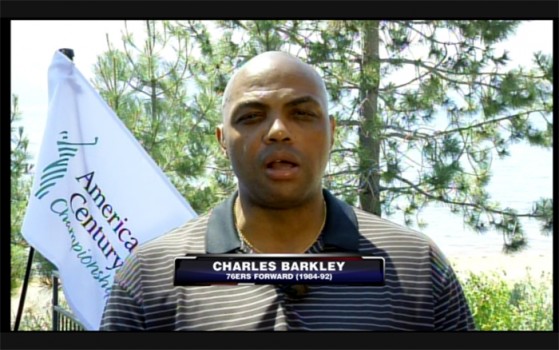 In a recent interview, Charles Barkley was questioned about his former team, the 76ers’ coaching search.  He was pretty forthcoming about his opinion, calling it a “joke.”

I’m not sure how Hinkie feels about this, but I have to imagine he’s going to have some sort of diss track on his next mixtape. 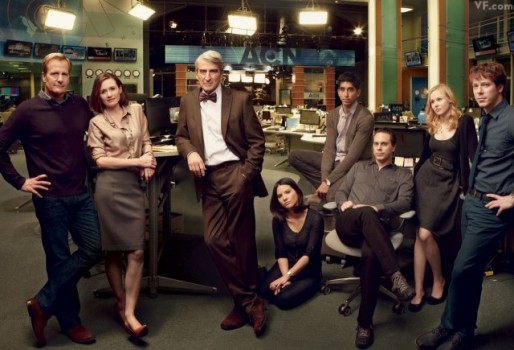 Naked in the Newsroom

I wasn’t feeling very well last night so I retreated upstairs to bed and turned on the TV at around 6 p.m. As I was flipping through channels, I landed on the new Discovery Channel show called ‘Naked and Afraid’ where they drop off two people (male and female) in a remote location COMPLETELY NAKED. It is insanity.

The people are allowed to bring one item with them (They usually choose something practical like a knife or a pot to boil water in…although one doofus brought a pair of freaking goggles that he never used cause he was completely scared of the ocean so….fail) and that’s it.

The show is awesome. Completely addicting and hilarious to watch as these two strangers basically behave like a married couple forced to live together for 21 days naked and getting bit by bugs and attacked by Hyenas. Luckily for the viewer, most of the time they do eventually get around to fastening some leaf underwear for themselves.

Also, the men on this show do not represent at all. The 3 episodes I watched, the men deteriorated mentally while the women had to carry the team to the finish. To be fair, one of the guys had an infected foot from stepping on 6 inch thorns in the desert but the other two guys (especially Bro Goggles) were basically useless.

One of the best parts of one episode was when the guy goes out and kills this really venomous snake (which actually bit one of the producers who had to be sent to a hospital asap), brings it back all proud, throws it down in front of his female counterpart only for her to look at it and say, “It looks like a baby.” Cue the trombone–Wha-Wha–as the guy is sent into a blinding rage.

Anyway, if you get a chance, check it out. Good stuff.

Unlike the Newsroom. Which is painfully bad at times. They had one episode where Dev Patel had his co-workers come in on a Saturday to show them a theory he had about Bigfoot. Seriously. How pissed off would you be if one of your co-workers scheduled an emergency Saturday meeting and then talked about Bigfoot? Kick in the crotch is what that would get you sucker. Who knows, it has a good cast so maybe it will get better in season 2.

I would also like to say congrats to Damien Sandow for his Money in the Bank win. Sandow is the most hilarious character in the WWE. He reminds me of The Rock back when Rocky was in the Nation of Domination and would walk around with gold chains and a fanny pack. Keep up the good work, Sandow.

The Slumpiest Sports Week of the Year

Oooo, fans, do read on!  That compelling title probably has you foaming at the mouth for more!  Well, let me clarify about the reason this week is the sccchhlompiest sports week of the year.

During the All-Star Break, the Phillies aren’t playing.   The actual All-Star Break is a fun time, but it’s over on Wednesday and that means we really are in a break.  There’s not going to be any baseball on for a while.  Even worse, there isn’t any filler sports to ease that pain except for the occasional Union game or Summer League basketball game.  Bleh.

Buuuuuuuuuuut, there’s still a couple gems that need discussing (see how I salvaged everything, there?)

Congrats to Tim Lincecum for throwing a no-hitter right before the All-Star Break.  With all of the struggles he’s had this season, being able to pitch a gem the way he did shows that there’s still a lot of talent in the Freak.

A lot of commotion was made about the fact that he threw 148 pitches to accomplish it.  People are criticizing Bruce Brochy for not pulling Timmy earlier in that game because of the pitch count and lead they had.

The way I see it, Lincecum is not the same pitcher from 2 years ago.  He may never be again.  The lack of velocity on his fastball is something you can’t just reclaim (unless your Bartolo Colon and you take a crap ton of PEDs.)  Even if Tim’s season goes in the toilet from here on out because of his high pitch count, he’ll still sit in the history books as a pitcher with a no-hitter and 2 Cy Young Awards.  He could have a career 8.00 ERA and people will still marvel at those accomplishments.  Bochy made the right call.

Jason Kidd was getting a lot of crap for taking phone calls during games that he was coaching this summer.  On one hand, it was the D-league, and the coaches don’t really coach those.  On the other hand, he’s been a coach for like a month, he could probably learn a thing or too.

Well, Mr. Kidd pleaded guilty to his DUI from 2012 today, so he was probably talking to his lawyers.  He’s gotta take those calls, lol.

On a closing note, Jay-Z’s Magna Carta Holy Grail is… actually… pretty good.  With all the corporate sponsorship, phone release, and poor audio quality, I was just dying to find reasons to hate this album.  But, I don’t.  It’s put together really well.

Turns out Rick Rubin didn’t do a single thing for that album, in spite of him being featured in the commercials.  Apparently, he just sat on the couch.  That’s what you can aspire to, boys and girls.  Become so cool that people will pay you to sit on a couch and enjoy music.  Then, they’ll film it. 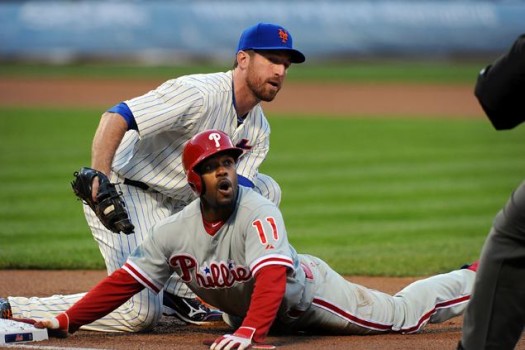 Who Saw that Coming?

The Phillies are what we thought they were. Mediocre. It has been this way the entire first half of the season. They will go on a run, get close to or at .500 and then fall to the back of the pack only to crawl their way back to a game within .500 and then go on a losing streak.

Of course, I think Randy had a big part to play in last night’s loss (can you say….JINX!) but I don’t put the loss entirely on his shoulders. Actually, scratch that, I do. Shame on you, Randall.

With all that being said, the season ain’t over. Heck, we haven’t even reached the halfway mark, and I for one am still on this Phillies bandwagon. Unfortunately, that wagon is being driven by Ruben Amaro Jr. who drives the wagon like Dr. Gonzo running from bats.

I can’t wait until the trade deadline when he trades away Cliff Lee for middling prospects that never amount to any more than a bag of magic beans (shout out, NT). So hang on tight, Phillies fan, this bumpy ride is about to get bumpier.