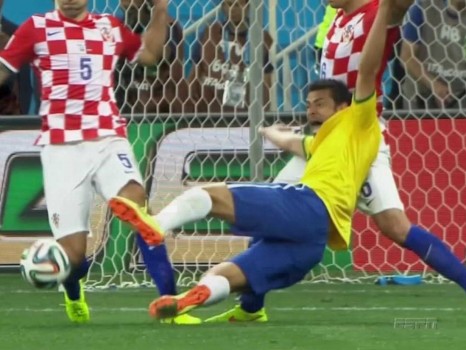 Diving back into things

Heyo!  Welcome back to theheadrush everyone! It has been too long since we posted and what better time than now, after one of the best days in sports?

For starters, I love how people get so pumped up for the World Cup and then the first game has a controversial call and everybody is like “See, THIS is why I hate soccer!” and they just lose interest. Every article I’ve read about the Brazil/Croatia game has had a comment like this at the bottom: “This is why I can’t get into soccer. You wouldn’t see flopping like this in the NBA, MLB, NFL or NHL.” Oh really?

Dwyane Wade was just fined $10,000 for FLOPPING in the NBA finals. His sole role at this point in his career is to get on the court and feign getting elbowed in the throat by Manu Ginobli. Lynn Swann flopped all over the field whenever George Atkinson breathed on him back in the 70’s. And surely in baseball, a batter has never had a pitch hit the bottom of their bat and pretended that it hit them just so they could get a free walk up to first.

There is diving in every sport (I was going to make a Sidney Crosby joke, but then I remembered I don’t watch hockey enough to comment on it with authority, but that dude looks like he flops all the time).

The only difference is that in soccer, diving has dire consequences.

It’d be like if the NBA gave Wade 50 points for flopping instead of fining him afterwards. That is how much the Brazil decision swung the game yesterday. Make no mistake about it, Croatia was hanging with Brazil big time up until that goal.

However, let’s also be real about this for a second: Brazil was playing the opening game of the World Cup which–if you haven’t heard–is being played in Brazil. The chances of there NOT being a controversial call that went in favor of Brazil and against Croatia had to be 100,000 to 1. At some point during that game, Croatia was going to get boned. If you didn’t know that going in, well…I don’t know what to tell you. That’s just the way it is. And on a side note, not to get all Alexi Lalas on you all, but the keeper probably should’ve saved that PK. Not that it’s an easy thing to do (understatement, it’s probably one of the hardest things to do in sports) but he guessed right and got his hands on it.

Now, with all that being said, if that was America playing against Ghana and one of the Americans flopped like a fish and were awarded a penalty kick, how awesome would that be? It’s gotta feel nice to watch your team get rewarded a PK for having a player do absolutely nothing other than act as if they just shot off a gun like Owen Wilson on a quail hunt.

For the record, I would like to congratulate myself for correctly predicting Brazil 3-1 over Croatia in the Yahoo Sports soccer pick em. Way to go, self.

My picks for today?

On to the NBA…

How great is it to watch the Heat get rolled up on by the Spurs? Man, they are getting destroyed.

And the cramp game was one of the funniest things I’ve ever seen. Lebron is just so freaking WEIRD! He is fantastic and a great player (one of the best ever) but he’s a weirdo.

I also loved how quick everyone either A.) Came to his defense with jabs at the twitterverse like “I didn’t realize how many people on Twitter knew what it was like to play in the NBA finals with cramps” SNARK! or B.) proclaimed Lebron to be a sissy.

I just think he is a head case and a weirdo, and that’s why he is hard to cheer for. I was seriously almost on the Lebandwagon, but after the cramp game, forget it. He is just lame.

The Spurs better win game 5 though, otherwise this thing is going 7.