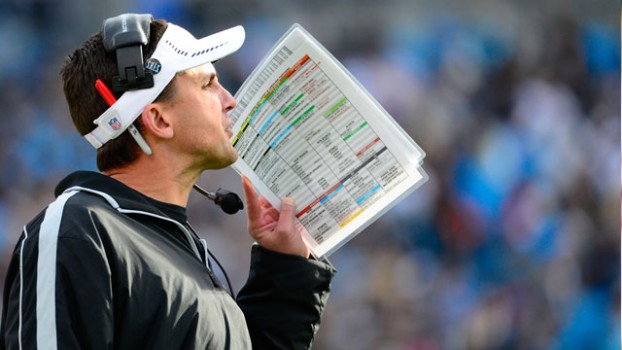 Dennis Allen: At the End of the Day

What I will remember most from Dennis Allen’s tenure as a head coach are a few things:

2.) He always wore a visor and on that visor was always clipped a red sharpie marker. I remember one of the Raiders beat writer’s asked a player if they had ever seen Dennis Allen actually write with the sharpie and he replied something to the extent of “no.”

3.) Each press conference, you could count on one of the following phrases to come out of his mouth: “At the end of the day…” “We gotta improve as a football team…” “I’m not here to get into what ifs or anything like that…” I’m doing a bad job remembering all of the little phrases he would use, but the one that stands out the most is ‘At the end of the day.’

4.) When I read articles about his firing like the one on Profootballtalk about how Mark Davis fired the wrong guy, it is infuriating. Because he didn’t.

The Raiders have a TON of problems right now and Dennis Allen was one of those problems. He had 8 wins over two and a quarter seasons. The Raiders just got blown out by the Miami Dolphins. They lost the Texans and Dolphins by a combined scored of 68-28 and I’m pretty sure most of those 28 points came in the 4th quarter.

The Profootballtalk article is titled “Mark Davis fires the guy who really wasn’t to blame.”

WHAT!? Wasn’t to blame? He is the head freaking coach who went 8-28 over his tenure!

Look at this sentence:

“Davis needs to realize that the problems run far deeper than a head coach who made the best batch of chicken salad he possibly could, given a list of ingredients that includes wasted draft picks and overpriced free agents whom no one else wanted.”

Ummm…what free agent that the Raiders signed this offseason is overpriced? Maybe Austin Howard…maybe… but they are set up to have 60 million plus in cap space next year. Are some of the free agents brought in by GM Reggie McKenzie bad? Of course! But they can cut them in the offseason with little to no re-percussions because most of them were signed to one or two year deals.

Also, wasted draft picks? Has Florio seen this year’s draft? It looks like Reggie knocked it out of the park with Khalil Mack–ProFootball Focus’ current defensive rookie of the year–and Gabe Jackson. Derek Carr looks like he is going to be ok, and they’re getting contributions from DT Justin Ellis, CB Keith McGill and 7th round DB T.J. Carrie.

Last year’s draft looks dicey at the top, sure, but D.J. Hayden hasn’t even played this season so it’s a little much to call him a wasted draft pick just yet–although the clock is certainly ticking on that–Menelik Watson may develop into a good right tackle and Sio Moore is one of the best defensive players on the team.

So look, kill the Raiders all you want cause they suck right now, but please, do realize that Dennis Allen was an awful head coach and he needed to go.

At the end of the day, it’s what needed to happen.

On to the picks!

Bengals -1.5 over the Patriots (This looks too good to be true. I think I’m getting trapped.)