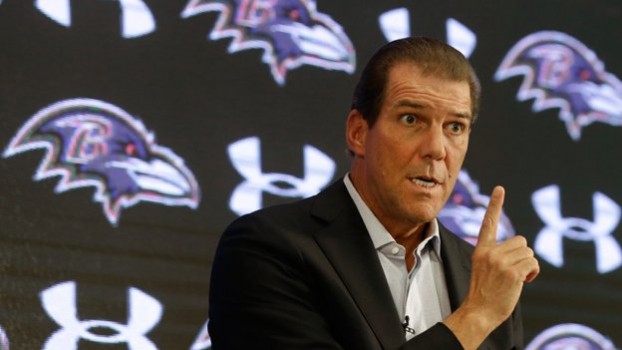 Lost in all this ‘the NFL is a terrible institution’ hullabaloo seems to be the fact that ESPN–who is going all out guns blazing on the NFL and their mistakes–is not the best source of journalism in the world.

For instance, I read their big old Ray Rice Outside the Lines expose and was pretty impressed by it all. It seemed like they had done their work and cross referenced everything but then, the bomb dropped this week that the text messages sent from the Ravens owner Steve Bisciotti to Ray Rice in the report were erroneously reported.

Here’s how it reads from ESPN’s report:

Minutes later, Rice’s phone buzzed. he could scarcely believe what he was looking at–back to back messages from Bisciotti. Rice read them aloud so everyone in the room could hear them:

Hey Ray, just wanted to let you know, we loved you as a player, it was great having you here. Hopefully all these things are going to die down. I wish the best for you and Janay.

When you’re done with football, I’d like you to know you have a job waiting for you with the Ravens helping young guys getting acclimated to the league.

You read that and you think two things: 1.) Bisciotti is trying to blackmail Rice with a job offer by sending him two texts out of the blue so he keeps quiet about some things and 2.) Those words are exactly what were sent in the text messages.

Unfortunatley, there are two problems.

It turns out that Ray Rice initiated the conversation with Bisciotti and that the text messages read differently than what ESPN wrote.

Here they are in full thanks to Deadspin:

Ray: I understand the decision but I am thankful for what you have done for me and my family. Me and my wife will continue to work on us and being better but I just wanted to say thank you for giving me a chance

Steve: I’m sorry we had to do this. I still love you and believe that you will be a great husband and father If you ever need to talk just call

Steve: I just spent two hours talking to Ozzie. It was all about you. We love you and we will always figure out a way to keep you in our lives. When you are done with football I will hire you to help me raise Great young men. I still love you!!!

Ray: I know it’s a rough time for all of us I love all of you and that will never change for life!

Steve: I will help you make it a great life indeed. I give you my WORD

Ray: That means the world to me and my family we greatly appreciate you and thank you.

Now, while the ESPN report does get the gist of the texts messages correct, they clearly manipulated the situation to make their case against the Ravens appear stronger than it seems to be and it does raise some doubt about what else they messed up in their story.

Also, the Ravens owner seems like a sleaze ball, like he should be a WWE manager or something walking down the aisle with the Million Dollar Man’s theme music. Everybody’s got a price.

On to the picks!

Last week, I went 1-2 (although I did call the Chiefs and the over on the Eagles/Redskins game) which makes me 3-3 for the season (hooray?).