Albums of my Youth: Flickerstick Edition

Sometimes, you have to go back in order to go forward. With that in mind, I thought it’d be fun to take a look back to look at some albums that I was into back in high school/middle school. And what better way to kick off the series than with a band that was made famous by being on a VH1 reality show?

Honestly, there are probably a lot better ways to kick it off, but I gotta admit, there was a time when I absolutely LOVED Flickerstick.

I remember watching the finale of ‘Bands on the Run’ in my brother’s friend’s basement and getting so fired up when they won, then having my mom order their CD for me in the mail, buying their t-shirts and ultimately going to see them play at the Electric Factory in Philly.

I actually think that Flickerstick’s Welcoming Home the Astronauts is the perfect allegory for my teenage years: at the time, I thought I knew everything when in fact, I was wrong about almost everything. Like Flickerstick.

As a change to the Daft Punk post, I will be going through each song on the album and giving it a score on a 1-5 scale. I’m going to try to be as objective as possible, but it’s tough to hide the nostalgia factor in my scores.

Let’s get started, shall we?

Musically, the song isn’t that bad. The lyrics are a little meh, but it has a nice build up. The guitars and the little alien noise are pretty darned cool. Gotta give this song a 3.

Blah, what a generic topic to base a generic song around. This is basically every Alt Pop song ever written. And again, the lyrics: “The Radi-O/it seems so shady Oh.” This song gets a 1.

3.) Chloroform the One you Love

“She’s Only 18/But such a beautiful dream/All she needs is some Chloroform and she’ll be mine” ummm….what? I never understood why they put ‘Talk Show Host’ and then this song back to back after ‘Lift.’ It totally sucks all the life out of the album. When you make an album, you only have so many bullets in the clip, and when you’re a band like Flickerstick, you can’t miss twice this early. This song also gets a 1. 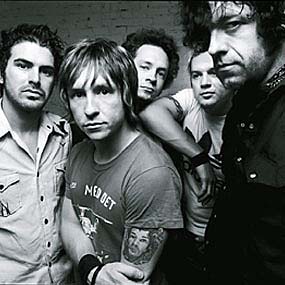 Fun fact, when they signed on with Epic after winning bands on the run, they had to change the lyrics to this song because Coca Cola didn’t like the fact that they said, ‘Come on I want to buy the world a Coke and lay here naked with my girl.’ So they changed ‘Naked’ to ‘Taken.’

Guess what else? I didn’t even have to look that fact up. That’s how into Flickerstick I was and how my brain is filled with useless knowledge.

Coke is better than the previous two songs, and trust me, for an angst riddled teen, I must’ve listened to this song about 10,000 times. This song does have the definitive Flickerstick lyric as well: ‘Come on let’s die until we live.’ Even as a 15 year old, that one had me shaking my head. I’ll give Coke a 2.

I feel like I’ve been waiting all album for this song which is certainly the bands’ biggest hit. Heck it even got played on Y100 back when Y100 was alternative rock. It still holds up, for me at least. I’ll give it a 3.

Definitely points off for the 1 minute build up that is just the same two guitar notes plucked over and over and over and OVER again. BUT, once it gets to the song, this is on par with Coke. The two guitar parts when played together are cool and I think the lead singer-Brandin Lea-sounds the best on this song. It gets a 2.5.

I love the ‘That Thing you Do’ drums on this song, and the music is pretty darn catchy. Power chords one-time (or I guess 7 times at this point of the album).

If only they could’ve come up with a better hook. The ‘You’re So Hollywood’ just isn’t cutting it. It gets a 2.

Gotta love the little synth at the beginning of the song. I remember this was one of my favorite songs on the album when I used to listen to it. In all honesty, I think that Flickerstick had the formula for writing mindless 3:30 minute pop-rock songs down COLD. Verse-Bridge-Chorus. Lather, rinse repeat.

When they veered from this formula, they were probably at their strongest (See ‘Lift’ and ‘Direct Line to the Telepathic’). I’ll give this a 2.5.

9.) Hey or When the Drugs Wear Off

The airplane take off sound effects on the snare drum at the beginning is a nice touch. As are the globs of chorus and flanger on the guitars. This song sounds like a B-side of a Killers album. It gets a 2.

I had totally forgotten about this song, and I’m not sure why because it’s one of the better ones on the album. Honestly, I’ll never understand why they went with ‘Talk Show Host’ and ‘Chloroform’ in the 2-3 slot when the could’ve easily put in ‘Got a Feeling’ and this song. I think that would’ve set a better tone for the album. This gets a 3.

11.) Direct Line to the Telepathic

It took them all album to get here, but here they are. I’m telling you, if Flickerstick had made more songs like this, they would’ve been really good. It’s one of the best examples of them being Pink Floyd-light (and by that I mean REALLY light…but still). Lyrically and musically, this is the best song on the album. They finish it off with a 3.5.

Would I recommend the album? Sure. But only if you listened to it in high school. If not, it may be a little bit harder to appreciate.

Like most things about the ‘Glory Days,’ they’re fun to visit now and then, but you don’t wanna live there.