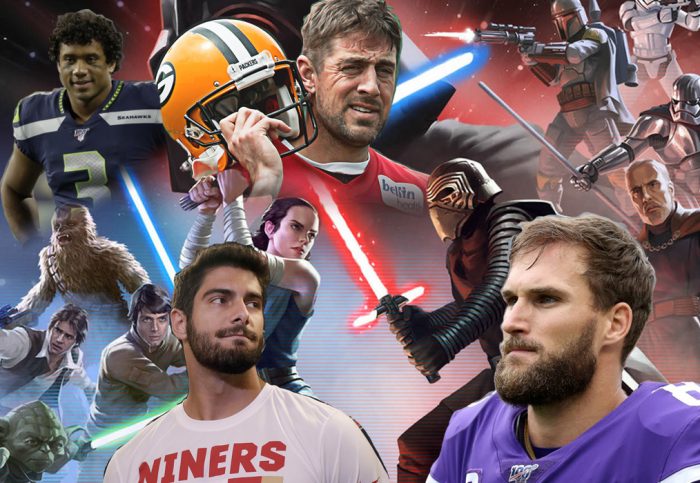 Man, how sweet are the graphics Randy’s been cooking up lately? You should just stop reading the column now and scroll back up to bask in their glory.

Appreciating the Star Wars graphics is an apt way to start the blog as last week, while I went 1-1 in my picks, I totally whiffed on my Star Wars analogy. Here I thought Titans coach Mike Vrabel was young Anakin to Belichick’s older and wiser Kenobi–the implication being that the young Padawan would eventually be chopped to pieces on Mustafar. I should’ve known that it was more like Vrabel being Anakin to Belichick’s Palpatine! Of course it would be Anakin (aka Darth Vader) who ended up destroying Palpatine and the evil Empire  by chucking the old man’s lightning scared body down a Death Star II reactor shaft, just like it was Vrabel who ended the Patriots empire by, well, winning a football game. Not quite as dramatic but alas, good riddance.

While the Titans beating the Patriots last week (hooray!) was no doubt surprising, I’ve got to think that the Vikings beating the Saints was arguably the bigger upset. I thought the Saints were the team to beat this year and had them going to the Super Bowl to represent the NFC.

So what can we surmise from last week? That every team has a chance to win it all. I am basing my picks solely on the assumption that we are most likely NOT going to get a 1-2 match up in both the NFC and AFC. One of these underdogs has to get through and I think the lower seeds in the NFC are stronger than those in the AFC. So it has to be one of these teams. The hard part is picking which one that will be…

Looks whose all grownsed up!  Kirk Cousins showed up last week and ‘You like that’-ed all over the Saints! What a thing to behold. Add that to sentences that I never thought I’d find myself typing.

This week, he will try to catch lightning in the bottle again on the road against the 49ers. I am so very tempted to take the Vikings here—mainly because of Dalvin Cook and the Minnesota run game against the 49ers weak run defense. But I just can’t. I think the niners get the job done at home, though the Vikings cover.

It’d be really cool to see the 49ers play the Packers in the NFC Championship—a throw-back to the mid-90s where the two teams faced off in the playoffs in 1995, 96, 97 and 98—but here’s where I think the upset happens. Russell Wilson in the post-season is no joke and I think he makes just enough plays with his legs to ultimately win a cold, low scoring game.

Though the Packers have Aaron Jones, who has been a beast this year, I think Aaron Rodgers makes one big boneheaded play—like a red zone INT or a strip sack fumble late—and the Seahawks prevail.