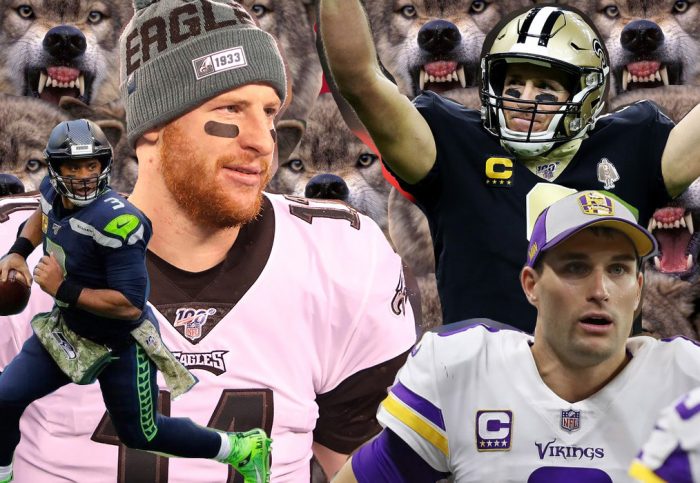 Hot dog, everyone, we’re back!  Adam and I have made a New Year’s resolution to return and give the readers what they have long been begging for: sub-par sports predictions and fodder!  In spite of our long sabbatical filled with marriages, kids, job changes, and peyote benders, we still feel compelled to deliver hard-hitting analysis and predict the future of sport.

I can assure you that in that time span, we have gotten no more wiser, no more humble, and no more accurate with our commentary.  And with that, BRING ON THE FODDER!!

Holy moly, the Eagles baaaaaarely squeaked into the playoffs thanks to a Dallas implosion down the stretch.  The stat about Wentz throwing for over 4000 yards with no single receiver having more than 500 yards for the season pretty much sums how everything has gone.  That team is a depleted shell of itself and any success can solely be attributed to Wentz and dumb luck.

On the other hand, Seattle is coming off a big loss against the 49ers for the division.  Russell Wilson is having a great season and they are still stocked with receivers ready to light up the Eagles’ secondary. Re-signing Marshawn Lynch is a pretty sneaky play on their part to fill the injuries at running back.  Even if he performs poorly, it’s still a huge morale boost with tremendous upside.  I don’t think it’s anything the Eagles can’t bottle up, though.  The Seahawks were top 5 in rushing yards this year, but injuries and a good Eagles run defense is going suffocate that.

This game comes down to the Eagles depleted O-line and secondary.  The Seahawks are going to be looking to throw and while the Birds’ secondary has had flashes of excellence, they are too easily exploited and get burned on the simplest of routes.  I expect Wilson to have a 300+ yard passing game and the question becomes: Will Wentz have time in the pocket and be able to do the same thing?  He’s throwing to literal practice squad players and I’m pretty sure they just signed my mailman to help add depth at the position.  I wouldn’t count on Boston Scott having another 3 touchdown game.

With all that, I still have to go with my trashy Philly heart:

The Saints have really had some gut-wrenching losses in recent playoff history.  I still remember almost choking on my spinach artichoke dip after the Saints secondary let Stefon Diggs catch that miracle touchdown in the 2017 Divisional Playoffs game.  I’m sure the Saints haven’t forgotten either.

The main difference is Minnesota’s quarterback: Kirk Cousins.  There was plenty of QB/WR turmoil that played out this year between Cousins and his receiving core.  Even with the few flashy plays and breakout games from Diggs, the Vikings still ranked 24th in passing.  They are still dysfunctional.

You know who isn’t dysfunctional?  Drew Brees.  The Saints are 4th in the NFL for passing offense.  The Vikings have a considerable amount of interceptions this year but they still allow 65% completion rate.  I expect the Saints wide-receiving core to have a great game.

Adam is going to have the AFC Wild Card predictions later this week so keep an eye out for that.  Thanks for reading — until next time.