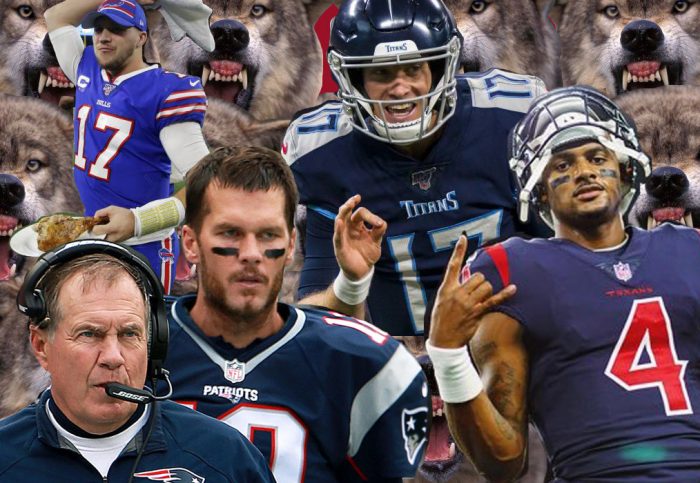 In researching this game—and by ‘researching’ I mean Googling ‘Bills vs Texans’ and clicking on the first link that popped up—I was surprised to see that all but one of the experts on CBS sports is picking the Bills. I think that the Texans take care of business at home to earn their annual wild card win, divisional round loss.

This year, heading into Randy’s fantasy football draft, I didn’t want to draft a quarterback early, like Deshaun Watson. I wanted to wait on a quarterback and get Josh Allen late in the draft. I chose Cam Newton instead (Whoops!) and Allen went a few players later. When it came back around, I decided to draft Lamar Jackson as my back up, not knowing that he would turn into the greatest quarterback the world has ever seen. Of course, I ended up losing in the championship to a team that started Kirk Cousins. So next year, remember during your fantasy drafts to wait on a quarterback. There are just so many good ones that Kirk Cousins can literally win you a championship. Except for everyone that plays in Randy’s league with me. Feel free to draft a quarterback with your early round picks.

Got a little distracted there—funny how that happens when writing a stream of consciousness blog about the Bills playing the Texans. I like the Texans for the simple fact that they have the better quarterback. I wish I had more analysis for you, but that’s all I got.

Whoa buddy. Now this is a game. Full of all sorts of intrigue and the very real possibility of this being the end of the Brady/Belichick era. Of course, the end of the Patriots dynasty coming at the hands of a jobber like Ryan Tannehill would be too convenient of an end. Everybody outside of New England wants it to happen. We would love to watch Derick Henry run for 200 yards and spike the ball on Belichick’s nuts. But of course, this is the real world. That’s not going to happen. Belichick is going to figure out a way to shut down Ryan Tannehill—something Tannehill has proven adept at doing himself up until this season—they will bottle up Henry and Brady’s old man strength will power them juuuuust enough to win the game.

Another factor is Mike Vrabel going up against his mentor in Belichick. It has a little bit of an Anakin Skywalker vs. Obi Wan Kenobi vibe, no? Of course, Kenobi already has the high ground. Don’t jump, Vrabel. You’ll just end up legless and on fire on the molten world of Mustafar.